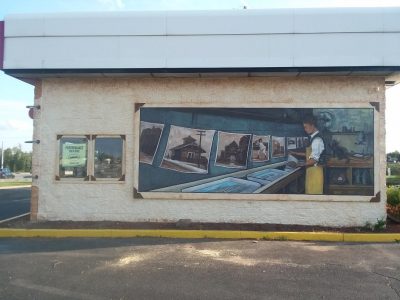 From the beginning, the Developing mural concept was a collaborative effort. Stemming from the desire for a mural that paid tribute to Brownsburg history, the design emerged from discussions with project partners about including references synonymous with Brownsburg, including it’s architectural history, and even the little league baseball team and their accomplishments in the World Series.

During the discussions, one word that kept resurfacing was the word, “developing.” Brownsburg was physically developing, meaning some historic buildings were being replaced with modern construction. As one can imagine, many residents took issue with the demolition of the iconic buildings, thus the desire to pay homage to these beloved landmarks.

All these factors were considered, leading to the word “developing” taking on a slightly different meaning when applied to generating the mural’s design. Having attended art school before the digital age, photography was still taught in the darkroom, the artist, Barb Stahl, can vividly remember being in the darkroom and experiencing the excitement each time a new image would come into focus.

The mural, meant to look like a page from a photo album, features a photographer in his darkroom, developing an array of photos that depict scenes from Brownsburg history. The mural also includes 3D sculptural elements meant to mimic the rings in a binder-style photo album.

Barb Stahl is an accomplished muralist and fine artist based in Indianapolis.

Developing was created through a partnership between Jiffy Lube of Indiana and the Arts Council of Indianapolis. The partnership is an opportunity to showcase local artists, beautify commercial corridors with original public art murals, and encourage viewers through positive images while expressing the goals of Jiffy Lube’s programming: Growing People Through Work.