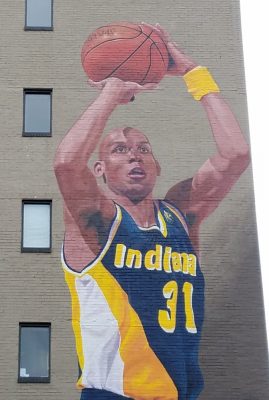 Located on an apartment building on Michigan Street near Delaware, you’ll find artist Pamela Bliss’ tribute to an Indiana icon, former Pacers player and Basketball Hall of Famer, Reggie Miller, who rounded out his career with a storied 2000 NBA Finals run and 2,560 3-point shots.  Bliss, who felt Indy needed a visual representation of its love for Reggie, reached out to the building owner, the Pacers, and even the man himself to secure all the permissions needed to proceed.