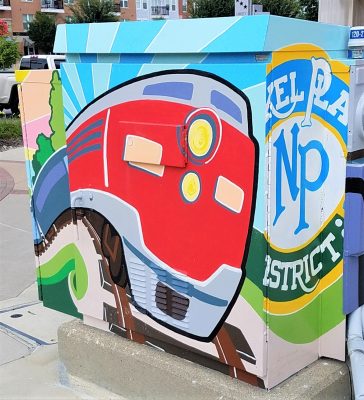 In the Fall of 2016, artist Jacque Hammonds was commissioned by the Fishers Arts Council to paint two utility traffic signals in Fishers. The artist offered a few thoughts about the artwork:

“One of my objectives for this project was to customize the design to say something about Fishers. I have lived in Fishers for several years, and one of the things that I loved most was the Monon Train that ran through Fishers. Since the Fair Train had an engine on both ends, I thought I’d create an image on one side of the box for the red south-going train, and the black engine on the back for the north-going train. They meet on the west side of the box as it goes through a silhouette of Fishers. As I painted this box, many motorists would honk and wave as they went by. They probably also laughed a bit at the over-sized safety vest I had to wear. Appropriately the Fishers Arts Council assigned the design of the box in the Nickel Plate District. I finished painting the box two days before Thanksgiving in 2016, and there never was another warm day in Fishers after that until Spring.”