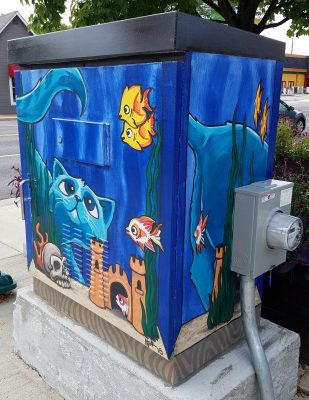 This wraparound design of an aquarium deftly mixes the expected with the unexpected.  The artist has shown both the inside and the outside of the aquarium, adding the cat on the outside as he views his own tail on the other side through the water.  The views are true to what an actual aquarium looks like.

Aquarium Surprise is one of an ongoing series of traffic signal box artworks sponsored by the City of Fishers as a way to enliven its downtown area.