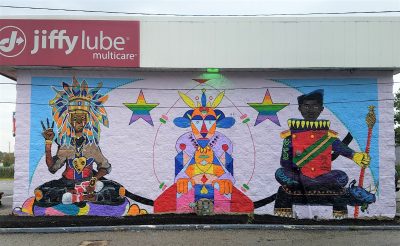 The three figures in the mural represent the fact that this Jiffy Lube location was the third one opened in Indiana, nearly thirty years ago. The idea of “kings” was developed by the mural’s artists, a team of one master artist and two apprentices. In the African American community, friends often refer to each other as “kings” and “queens” in order to convey appreciation, pride, and support. As a mentorship project, the love and support is directed towards the new artists who deserve to have the confidence and stature of a king. A “king” is also graffiti slang for a highly accomplished writer:  all three of the artists who created this mural have street art backgrounds.

Each artist created a figure.  The leftmost figure, a street-art-style “black Indian,” was created by Jamahl Crouch.  The center figure, an abstracted character with both Native American and space-age qualities, was created by Ish Nieves, the master artist.  The right-hand figure, a more representational African king riding on a rhinoceros, was created by Matthew Cooper.  Together, the three kings represent the artists themselves, each painted in their signature styles.  As a final nod to the Jiffy Lube mural initiative, the bright blue feathers in the rhinoceros’ mouth are meant to represent the bird in the mural across town that was painted in 2018 by Carl Leck:  in the tradition of friendly rivalry (and actual admiration) between street artists, the rhinoceros has eaten Leck’s bird for lunch!

Three Kings was created through a partnership between Jiffy Lube of Indiana and the Arts Council of Indianapolis. The partnership is an opportunity to showcase local artists, beautify commercial corridors with original public art murals, and encourage viewers through positive images while expressing the goals of Jiffy Lube’s programming: Growing People Through Work.