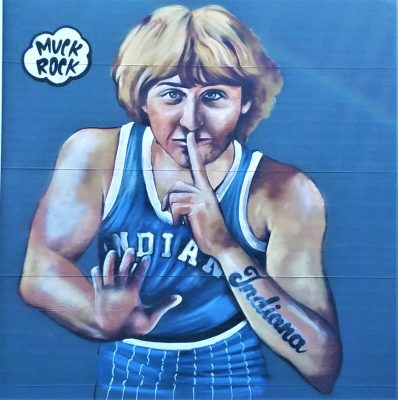 Larry Bird, widely regarded as one of the greatest basketball players of all time, was once known as the “Hick from French Lick” and is counted as an Indiana basketball icon.  From his early days playing for Springs Valley High School, to his time leading the undefeated Indiana State Sycamores to the National Championship Game, to his 12 all-star appearances and 3 Championships in the NBA, to NBA Coach of the Year and NBA Executive of the Year, Bird has known success in everything he has attempted.  And though he is known locally as “Larry Legend”, he is as loved in Boston, home of the Celtics NBA team, as he is in his home state.  It was the continuous requests from Celtics fans that moved artist Jules Muck to create this mural during an informal artist’s residency in the summer of 2019.

The mural, which derived from a photograph of Bird that appeared in a 1977 Sports Illustrated story, originally sported a number of drawn-on tattoos relating to his life and career, but at Bird’s request the artist removed all of them except the one stating “Indiana” in flowing script. Bird had indicated that although he liked the mural and had no objection to tattoos on other people, he didn’t want people to think he had tattoos in real life.  His request to remove the tattoos was somewhat controversial, with some commenters stating that he didn’t understand that it was an artistic intepretation and others supporting his decision to maintain control over his own image.