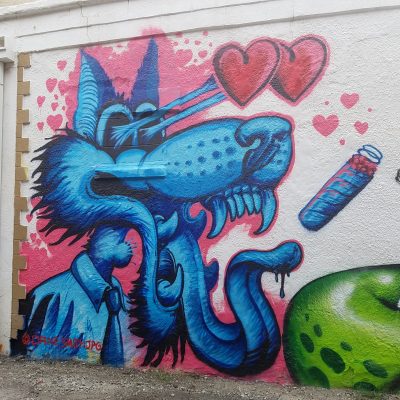 This blue wolf, shown broadly reacting to Jules Muck’s Alien Leia mural to its right, is a takeoff on Tex Avery’s famous cartoon character.  Avery, who worked for Warner Brothers and MGM in the “golden age” of mid-20th-century animation, was known for his quirky style that broke the boundaries of the more familiar Disney animation, where actions seemed more in line with the real world.  In a Tex Avery cartoon, anything could happen and normal physical principles seemed not to apply.   The Wolf, which took on various forms in different cartoons, often expressed lustful desire in the face of an attractive female character.

Dane Smith is a tattoo, gallery, and street artist based in Indianapolis.