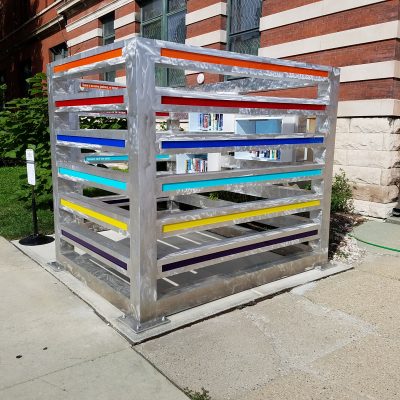 Part of The Public Collection, Fissure is a combination sculpture and book-sharing station. The installation is composed of a series of horizontal bands, which pay homage to the horizontal limestone banding found on the nearby Athenaeum building, which was originally designed by Vonnegut and Bohn in 1893 to provide social support to Indianapolis’ German immigrant community. However, there is also a cage-like element to the work, which in some ways reflects the traumatic experience of many immigrants today. Even in the last century, the deeply-entrenched German community experienced such popular hatred after the first World War that the building’s original name, Das Deutsche Haus, had to be changed. But the artists also provide an unencumbered opening into the project, where one finds books surrounded by colorful acrylic panels backlit by programmed lights. The opening is a metaphor for access to knowledge that all immigrants may find; the concept is also highlighted by an included quote from  that illuminate a quote by the American artist Aberjhani:  “There is no envy, jealousy, or hatred between the different colors of the rainbow.  And no fear either.  Because each one exists to make the others’ love more beautiful.”

The artists, Quincy Owens and Luke Crawley working as Owens + Crawley, are Indianapolis and Carmel residents respectively.  They maintain a studio in The Harrison Center and create publicly-scaled projects together as well as varied bodies of work individually.