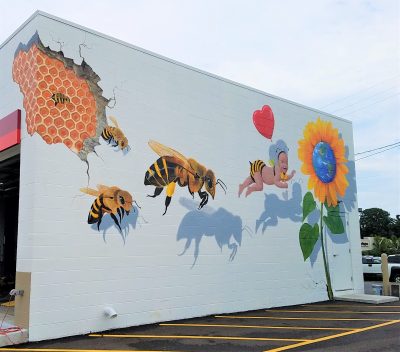 Bee Mindful: They are Important

Given the opportunity to paint whatever she liked on the wall of this Jiffy Lube store, the artist chose to depict the importance of bees and their drastic drop in population because of herbicides, pesticides, deforestation, and urbanization. When bees are gone, everything in the world, including humans, will cease to exist. True to her style, the artist depicted an illusion of the wall breaking open to reveal a honeycomb, with several bees in various states of maturity flying out from it.  The final “bee” is a baby in a bee costume holding a heart balloon, to indicate the importance of bees to human life.  The bees appear to be flying towards a giant sunflower, with a world globe in its center.

Although not apparent to the casual viewer, the artist also added several details that ground the mural in the time (summer 2019) and place it was painted and reflect her personal concerns.  A careful look at the globe in the sunflower reveals red and orange areas in the depiction of South America, to indicate fires in the Amazon rainforest that were in the news at the time.  There is also a tiny hurricane in the Caribbean–indicating Hurricane Dorian, which was just forming at the time and was projected to be one of the most devastating hurricanes in recent memory–and a dot indicating Indianapolis.  The baby was created to be of an indeterminate race, and the pattern in the wings of the baby’s bee costume is reminiscent of the chain link fences that controversially characterize conditions in immigrant holding camps along the U.S.’s southern border, also in the news while the mural was being created.  All together, they reveal an artist who is passionately devoted to the health of the world and moved by crises that are damaging to humanity.

Bee Mindful… was created through a partnership between Jiffy Lube of Indiana and the Arts Council of Indianapolis. The partnership is an opportunity to showcase local artists, beautify commercial corridors with original public art murals, and encourage viewers through positive images while expressing the goals of Jiffy Lube’s programming: Growing People Through Work.