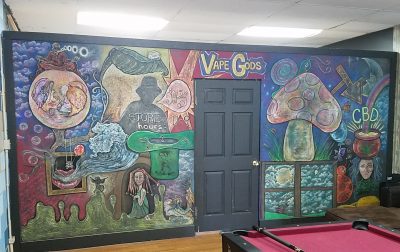 To Dream with Alice

The artist was asked to create a mural for Vape Gods that would fit the theme of the business, which sells vaping and CBD products.  The art work evolved from an orb with a vaping Buddha to include trees, eyes, and surreal scenes derived from elements of the Alice in Wonderland story, and reminiscent of a drug trip.  The title could also be an allusion to the 1971 novel Go Ask Alice, the story of a teenage drug addict, or the 1967 song “White Rabbit,” written by musician Grace Slick and recorded by the band Jefferson Airplane in 1967; both were likewise inspired by Alice in Wonderland. Many images are hidden in the shading and it is left to the viewer to determine their meaning.

Indianapolis-based artist Charity Golden has drawn all her life and pursued art courses during her sociology program at Ball State University.  Although she has done small paintings (some of which also hang in the business), this is her first solo public artwork.  The artist shared that her artwork is integral to her identity as a survivor of abuse; she feels that she is a testimony of that survival to inspire other women.