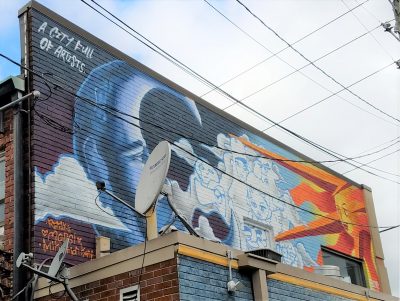 A City Full of Artists

This mural was created during the 2019 CHROMATIC graffiti festival in the Broad Ripple neighborhood.  It is the production of Blend Creative Minds, the festival organizers.  Rafael Caro, Erica Parker, and Mike Kane were the Blend team assigned to this mural. The piece displays the artists’ love for all of Indianapolis’ artists, including musicians and literary artists. The design features the sun and the moon with human faces, and between them a series of caricatures in a white cloud. The title of the mural is inscribed in the upper left corner.

CHROMATIC is a re-boot of the classic Indianapolis graffiti jam festival SubSurface, which originated in Broad Ripple in 2002 as a way to connect Indianapolis’ street artists with the regional and national graffiti scene.  SubSurface was staged annually through 2015, the last several years in Fountain Square. The goal of CHROMATIC is to bring more color to the city and highlight the work of local artists.