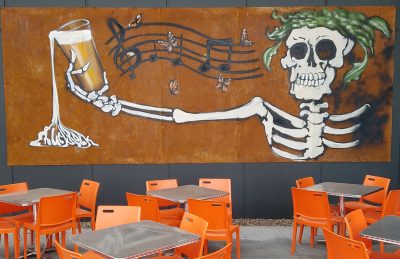 The mural is located by the outdoor patio of Chilly Water Brewing Company on Virginia Avenue in Fletcher Place.  The mural depicts a skeleton holding a beer in its extended arm.  The beer is spilling to the ground and the splash forms the artist’s tag “MuckRock”.  There are also musical notes, referencing the Chilly Water’s owners’ love of music.  The mural was painted during an informal artist’s residency in the summer of 2019.