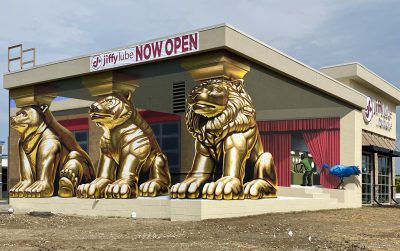 Lions and tigers and bears, oh my!

Throughout history, powerful and influential places have used art and architecture to evoke an emotional, often fearful response from their guests: “This place looks expensive and important.” Meanwhile, on the world stage, we often see that behind the “curtain” of this impressive facade there is actually just one man who is pulling the levers, using the great influence of public opinion to facilitate his own personal goals.

In this mural, shedding light on the unseen, is a large, blue ibis bird, who is pulling back the curtain for us all to see the truth. In ancient Egypt the god of truth and wisdom, Thoth, is represented as a man with a human body and the head of an Ibis. The word “Truth” was derived from his name, and he is said to have been the creator of both mathematics and written language. The real ibis lives in wet marshland and uses its beak to find food in the unpromising mud below the water–accordingly, the Egyptians believed that Thoth created physical matter from the ethereal, bringing into being the world they loved from the base mud of nothingness. Here we have the ibis pulling back the curtain, exposing the truth that fear (represented by the grand beasts) is an illusion, nothing but a construct upheld by the unseen. This mural represents the search for truth, and once the truth is revealed, rebuilding a positive future.

Carl Leck is a well-known and popular Indianapolis-based muralist. He is known for his stunning visual effects and clever themes.

Behind the Curtain was created through a partnership between Jiffy Lube of Indiana and the Arts Council of Indianapolis. The partnership is an opportunity to showcase local artists, beautify commercial corridors with original public art murals, and encourage viewers through positive images while expressing the goals of Jiffy Lube’s programming: Growing People Through Work.