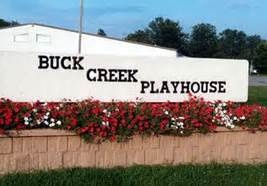 In 2001, Buck Creek Players moved into its current home, the Buck Creek Playhouse, at 11150 Southeastern Avenue. The current space was originally built as an indoor tennis facility that was later converted into a church.  Much of the space was rebuilt to accommodate the productions it would now house.  While increasing capacity, the space is still intimate, seating a maximum of 130 people.