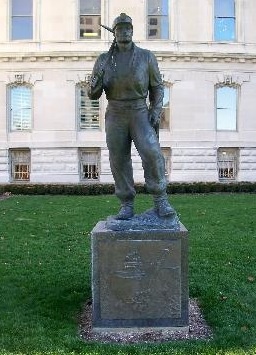 The Coal Miner is a public artwork by American artist John J. Szaton (1907–1966) and located on the west lawn of the Indiana Statehouse in Indianapolis, Indiana. The statue is a copy of a 1964 work by Szaton that was commissioned by the Illinois state legislature in 1963. The sculpture copies a 1946 painting by Vachel Davis, an Illinois Pentecostal minister, journalist, poet, and amateur painter who had worked as a coal miner and was an active champion of coal mining safety. Davis had

The Coal Miner is a public artwork by American artist John J. Szaton (1907–1966) and located on the west lawn of the Indiana Statehouse in Indianapolis, Indiana. The statue is a copy of a 1964 work by Szaton that was commissioned by the Illinois state legislature in 1963. The sculpture copies a 1946 painting by Vachel Davis, an Illinois Pentecostal minister, journalist, poet, and amateur painter who had worked as a coal miner and was an active champion of coal mining safety. Davis had given the painting to the State of Illinois as part of his efforts to create a monument to Illinois coal miners who had lost their lives on the job; he was acquainted with Szaton and suggested that he be hired as the sculptor.

The Indiana memorial was commissioned in 1965 with funds appropriated from the Indiana General Assembly.  It was cast in 1966 and installed in 1967 to commemorate the state’s coal miners who lost their lives in the mining industry. The 7-ft. tall statue rests on a 3-ft. square, granite base supported by a concrete foundation. Both the Illinois and Indiana statues were cast at the Spampinato Art Workshop foundry in Chicago.

The Coal Miner, which measures 85 in. x 26 1/2 in. x 28 in., is installed in the northwest corner of the Indiana Statehouse lawn and faces west. The figure wears overalls, boots, a belt, a long-sleeve shirt, and a miner’s hat. He has a contrapposto stance with his proper left foot forward. He carries a miner’s fire safety lamp, or “bug light”, in his proper left hand, which is at his side. His proper right hand is raised, gripping the base of a miner’s pick axe that rests on his proper right shoulder. The shirt-sleeve on his proper right arm is unbuttoned and hangs open on his forearm. The belt hanging at his waist has three visible belt punches. He wears a MSA Comfo Cap Model P miner’s hat with its battery pack clipped to the backside of his belt. The artist’s signature, “John Szaton, Sc.” appears on the proper left side of the base, toward the front. On the proper left side of the base, toward the back, a foundry mark reads, “Cast by Spaminato [sic] Art Foundry Chicago, Ill. 1966”.

The square, granite base measure 35 7/8 in. x 35 1/2 in. x 36 in. Its front-facing side has a bronze, bas-relief plaque depicting a drag-line mining crane at work in a strip mine.A cement foundation, 4 to 6 inches thick, supports the base.

The plaque on the rear-facing side reads, “Without coal the marvelous social and industrial progress which marks our civilization could not have been achieved. But the production of this vital commodity, so essential to the world’s progress, has cost the lives of thousands of ‘coal miners’ in Indiana. It is to the supreme sacrifice of these men that this memorial is dedicated.”

Reproductions of small-scale versions of the monument have been mass-produced; over 200 have been given as gifts by the coal industry over the years.

The artist, John J. Szaton, was born in 1907 in Ludlow, Massachusetts of Polish descent. He apprenticed under well-known Illinois sculptor Lorado Taft, who invited Szaton to come to Chicago after meeting him on a lecture tour of various high schools and art schools in Massachusetts. Szaton studied at the Art Institute of Chicago and at the now-defunct National Academy of Art in Chicago. He executed sculptures both for Taft and on his own, continuing to work at Taft’s studio until it disbanded in 1947.  He moved his family to Tinley Park, at that time a small rural suburb of Chicago, and commuted to Chicago to work during the week as a greeting card engraver. The Coal Miner, in all its forms, became his most widely-known sculpture. Szaton died in 1966 and is buried in Cedar Park Cemetery, Calumet Park, Illinois.

Read more about the sculpture at en.wikipedia.org/wiki/Coal_Miner_(statue)

Read more about the artist at https://en.wikipedia.org/wiki/John_J._Szaton