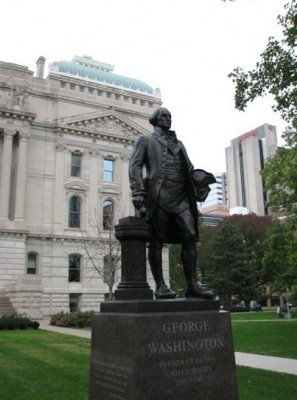 The statue depicts Washington dressed in breeches with an apron and medallion decorated with Masonic symbols. Washington holds a tri-cornered hat in the crook of his proper left arm, and a gavel in his proper right hand. He wears an open overcoat with buttons and has a short podium to his proper right. Washington’s attire depicts the first President as he may have looked when he laid the cornerstone for the U.S. Capitol in Washington, D.C. The sculpture is mounted upon a stepped, inscribed granite base.

The base of the sculpture is inscribed with the following:
Northwest corner of sculpture: Donald De Lue Sc. 1959
Northeast corner of sculpture, east side, lower rear: The Modern Art Foundry, Inc. (Foundry mark) 1986 New York, New York
Front/south side of base: GEORGE WASHINGTON PRESIDENT OF THE UNITED STATES/1789-1797; First in War, First in Peace, First in the Hearts of His Countrymen

West side of base: Observe good faith and justice toward all nations. Cultivate peace and/harmony with all. Religion and/morality enjoin this conduct./George Washington

East side of base: My attachment to the Society of which we are members will dispose me to contribute my best endeavors to promote the honor and interests of the Craft./ George Washington, Freemason 1753–1799

North side of base: (Masonic symbol, square and compass) Presented to the People of Indiana From the Freesmasons of Indiana/George Washington Commission/The Grand Lodge Free and Accepted Masons of the State of Indiana/May 19, 1987

A Smithsonian’s Save Outdoor Sculpture survey completed in October 1992 noted the condition as ‘well-maintained’.

George Washington as Master Mason was sculpted initially from a wax mold at Donald De Lue’s studio in Leonard, New Jersey, and copyrighted in 1959. This sculpture was re-cast in 1986 and dedicated May 19, 1987 by the grand master of the Freemasons of Indiana, J.C. Paxton of Warsaw, Indiana. The total cost of the gift was $100,000. Lieutenant Governor John Mutz accepted the statue on behalf of the state.[8] George Washington as Master Mason was inspired by sculptor Bryant Baker’s work, Illustrious Brother George Washington, which also depicts the subject in a similar pose with Masonic iconography.

Donald De Lue’s monumental sculptures embody patriotic heroism, classical mythology, and biblical themes. De Lue studied at the Boston Museum of Fine Arts School; in Paris with Alfredo Pina after World War I, and in New York with Bryant Baker. He was professionally affiliated with the ANA, National Sculpture Society (president), NIAL, Architecture League, American Artists Professional League, among others.[10] He was also the art committee chairman of the Hall of Fame for Great Americans, New York University, an artist with the Federal Art Project, and advertising editor for American Artist Magazine.