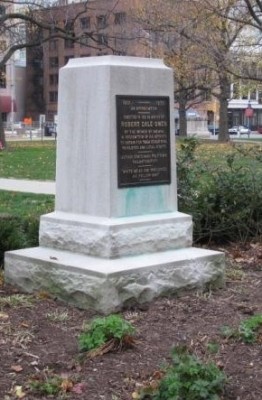 Robert Dale Owen Memorial is a public artwork located at the south entrance of the Indiana Statehouse along Washington Street in Indianapolis, Indiana. The memorial was dedicated to the state of Indiana in 1911 in honor of the politician Robert Dale Owen (1807–1877). The bronze portrait bust by Indiana artist Frances Goodwin has been missing on this memorial since 1970. The remaining memorial pedestal is made from three stone blocks. The top pedestal includes a commemorative plaque.

Robert Dale Owen Memorial is a public artwork located at the south entrance of the Indiana Statehouse along Washington Street in Indianapolis, Indiana. The memorial was dedicated to the state of Indiana in 1911 in honor of the politician Robert Dale Owen (1807–1877). The bronze portrait bust by Indiana artist Frances Goodwin has been missing on this memorial since 1970. The remaining memorial pedestal is made from three stone blocks. The top pedestal includes a commemorative plaque.

The 200 pound bronze bust is in the likeness of a bearded Robert Dale Owen. The portrait bust sat on the top of the pedestal, in the center, facing the south entrance of the Statehouse. Presently, the bust is missing. The remaining memorial pedestal is composed of three stone blocks and stands 70 inches high. The lowest block is 45.5 inches wide, 42.5 inches deep, and 10 inches tall. The middle block measures 32" x 28.5" x 10". The top block is 24" x 21.5" x 50" .

A memorial plaque is centered on the face in the middle of the top block and measures 20" x 24". It reads:
1801-1877 / An Appreciation / Erected in the honor of Robert Dale Owen by the Women of Indiana in recognition of his efforts to obtain for them educational privleges and legal rights. / author, statesman, politician, philanthropist / "Write me as one who loved his fellow man."

In 1905, the Robert Dale Owen Memorial Association was granted permission from the state to place the future memorial in the rotunda of the Statehouse. Today the memorial sits outside of the Statehouse walls, facing the southern entrance to the building where it was dedicated in 1911.

When fundraising efforts began in 1905 for the Robert Dale Owen Memorial, it was called "a woman’s movement" and was meant to draw attention to the ongoing struggle for women’s sufferage. The Memorial Association intended to raise $2,000-$2,500 for the commission of a bust and memorial. Artist Frances Goodwin was chosen for the creation of the bust. After Goodwin’s clay model was approved by the Memorial Association and by Owen’s son, Ernest Dale Owen, the final bronze bust was cast in Paris.

The completed work was presented to the state on March 8, 1911, "as a lasting memorial to a man who for many years persistently labored to secure just laws concerning the educational and property rights of women." The governor, state legislature and Owen’s great grand niece, Martha Fitton, were in attendance at the dedication.

In 1905, the Robert Dale Owen Memorial Association was granted permission from the state to place the future memorial in the rotunda of the Statehouse. Today the memorial sits outside of the Statehouse walls, facing the southern entrance to the building where is was dedicated in 1911. The original memorial includes a portrait bust of the politician on a pedestal with commemorative plaque. On September 19, 1970, the portrait bust was stolen.

The Robert Dale Owen Memorial Association was formed on June 30, 1905 by the Federated Women’s Club of Indiana to urge the women of Indiana to help raise funds for the Robert Dale Owen Memorial. The Association was made up of ten women from around the state and led by Julia Conklin. The group published at least two pamphlets that were distributed around the state to educate women about their efforts. Robert Dale Owen and What He Did for Women of Indiana offered a brief biography of the politician. Another pamphlet appealed to the women of the state to help in fundraising efforts, detailed why women should care about a memorial for Owen, and presented many avenues for donation. To women’s clubs dedicated to raising funds, they offered to send Association members to meetings to speak about the life and legacy of Robert Dale Owen. George B. Lockwood sold autographed copies of his book New Harmony Communities and donated the proceeds to the cause. Julia Conklin did the same with her The Young People’s History of Indiana. The Women’s Club of New Harmony was the largest contributing group, raising $50 for the fund. In their final meeting on December 30, 1912, Association member Julia Sharpe presented her official record of the work accomplished by the group. The volume included illustrations of each member and a reproduction of the memorial bust. The group gave the book to the Indiana State Library as a reference for future generations.

Frances Murphy Goodwin (1855–1929) was born in Newcastle, Indiana to one of the city’s oldest families. Both she and her sister, Helen Goodwin, were well known in Indiana artist circles. Goodwin briefly attended The Indiana Art School before moving to the Art Institute of Chicago to study painting. She soon discovered her love for sculpting and eventually worked as a student under the sculptor Lorado Taft while at Chicago. She also studied sculpture at the Art Student’s League in New York City with the sculptor Daniel Chester French. Goodwin eventually traveled and studied art around Europe for four and a half years and set up a studio in Paris with her sister. She died in Newcastle at the age of seventy-four. A year later, in 1930, the Henry County Historical Society planned to commission a memorial for their grounds dedicated to Frances Goodwin and modeled after a bird fountain she had created at the Newcastle Public Library.

Frances Goodwin’s first commission was for Education, a sculpture displayed in the Indiana building at the World’s Columbian Exposition in 1893 for which she earned an honorable mention. The statue later found its way into the Office of the Governor of Indiana. Goodwin’s other works include a marble statue of Schuyler Colfax in the senate gallery at the U.S. Capitol and a bronze memorial of Captain Everet Benjamin in New York. Her busts of Newcastle poet Benjamin S. Parker and Indianapolis rector Reverend James D. Stanley were on display both at the Historical Society of Henry County and at Herron School of Art in Indianapolis. She also sculpted many studies of baby hands, which were popular with the public. After living in Paris for a few years, she returned to the U.S. to compete for the commission of the Robert Dale Owen Memorial and opened a temporary studio in Indianapolis to create the clay mold of the future artwork. She returned to Paris to cast the final bronze bust.