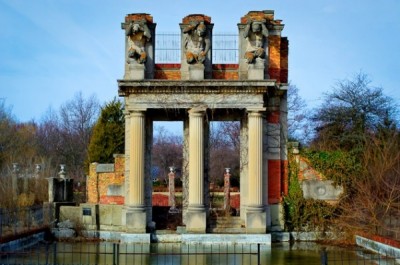 In 1916, at the centennial celebration of Indiana statehood, John and Evaline Holliday donated their 80-acre country estate along what is now Spring Mill Road to the City of Indianapolis for a park. It was the Hollidays’ intent that the land be used for recreation and the study of nature, and the grounds as a public park and playground.

Meanwhile, New York’s first skyscraper, the St. Paul Building, had been built in 1898. One of the outstanding architectural sculptors of the day, Karl Bitter,

In 1916, at the centennial celebration of Indiana statehood, John and Evaline Holliday donated their 80-acre country estate along what is now Spring Mill Road to the City of Indianapolis for a park. It was the Hollidays’ intent that the land be used for recreation and the study of nature, and the grounds as a public park and playground.

Meanwhile, New York’s first skyscraper, the St. Paul Building, had been built in 1898. One of the outstanding architectural sculptors of the day, Karl Bitter, designed the façade of this building to include three massive statues made of Indiana limestone. The statues, called “The Races of Man,” represented the African-American, Asian and Caucasian races laboring together as they appeared to hold the skyscraper on their backs.  In the 1950s the St. Paul Building owners decided to build a modern skyscraper on the site and before they demolished the old building, they held a competition among cities for a plan to display and preserve the Bitter sculptures. Indianapolis offered to place them in Holliday Park, which by then had become an arboretum, and was awarded the gift in 1958.

The design for a Romantic-style constructed ruin had been submitted by Indianapolis artist Elmer Taflinger, a painter, and proposed to reproduce the façade of the building’s entry including original facing stone, doorways and the ledge that upheld the figures. The statues were placed east of the new community center that was under construction at the time. A reflecting pool was located between the building and the statues and two geysers of water rose from it. Taflinger worked to complete the project over the next twenty years as funding became available.

As older Indianapolis buildings were demolished and pieces worthy of salvaging became available, Taflinger incorporated them into the ever-evolving Ruins design. He included a horse trough formerly located at the base of an historic monument on Fountain Square, twenty-six Greek columns from the Sisters of Good Shepherd Convent, and four of the eight statues that stood for many years above the Marion County Courthouse until it was demolished in 1962. He also included two capitals from columns originally located at Broadway Christian Church and a stone table once part of an altar at St Paul’s Church.

The Ruins were eventually dedicated in October 1973, but as the 1976 Bicentennial celebration approached, Taflinger proposed an expansion of his design to convert it into a symbolic panorama of American history. His concept, Constitution Mall, symbolizes the American Republic in which men and women of all races are united in working for freedom and justice. The elaborate plan added a large reflecting pool at the east side of the original statues, extensive landscaping with long lines of English hornbeams, one for each state of the Union, and groups of evergreens representing the thirteen original colonies. A single columnar oak represented Washington, D.C. and the Washington monument. Giant slabs of rough Indiana limestone were inscribed with the words of the preamble to the Constitution.  Constitution Mall was finally rededicated in September 1977.

Over the years the landscaping grew and overgrew the site, and the structure fell into disrepair.  In 1994 the Friends of Holliday Park spoke about dismantling the installation due to safety considerations and their desire to refocus the park on nature programming, but the community outcry to keep them outweighed their decision and small improvements were made instead.  The row of boxwoods had not thrived in the Indiana winters and in 2005 were replaced by basswood trees. Several of the statues of the goddesses were damaged and unstable and had to be removed. The reflecting pools developed leaks and were no longer filled with water. After the nature center was opened in 2004, the old community center was torn down and the view of the ruins was much improved; however, the entire site remained fenced in due to areas of structural instability.

Renovations completed in fall 2016 returned The Ruins to an appearance much as Taflinger intended, and added more interactive, family-friendly elements such as a shimmer pool. 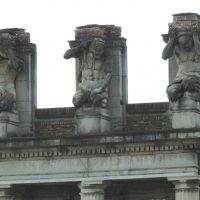 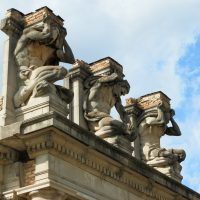 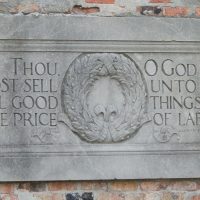 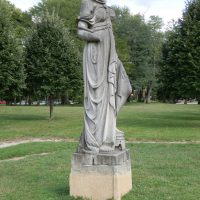 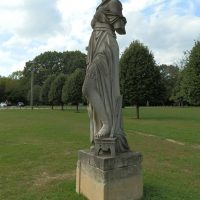 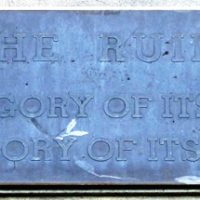 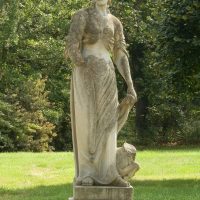 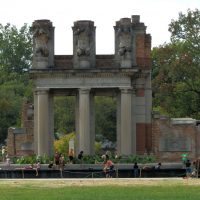 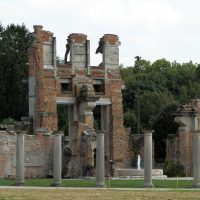