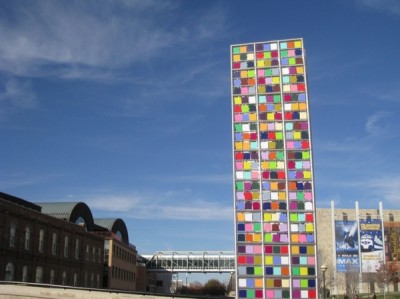 The Tent was created by internationally renowned artist Donald Lipski. Lipski was commissioned for the project by the 500 Festival’s 50th Anniversary Artist Selection Committee, with support from the Arts Council of Indianapolis. The committee was comprised of representatives from the 500 Festival and the 500 Festival Foundation, as well as representatives from the Indianapolis Museum of Contemporary Art, Eiteljorg Museum of American Indians and Western Art, Herron School of Art and Design, Expo Design and the Indianapolis Motor Speedway. The Tent is a wind-activated sculpture and was built from tubular stainless steel. It has nearly 500 panels of polished stainless steel and is painted on the outside with 23 bright colors.

Donald Lipski was born in Chicago, Illinois in 1947. Although his first welded sculptures as a teen won him The Scholastic Art Award in high school, he became a history major and anti-war activist at the University of Wisconsin–Madison, earning a B.A. in American History in 1970. He then pursued an MFA in ceramics at Cranbrook Academy of Art in 1973. Lipski taught at the University of Oklahoma from 1973 to 1977, when he moved to New York.  Lipski soon gained recognition with his early installations. In 1978, he won the first of three National Endowment for the Arts grants, followed by a Guggenheim Fellowship in 1988, an award from the American Academy of Arts and Letters in 1993, The Rome Prize of The American Academy in Rome in 2000, and Cranbrook’s Distinguished Alumni Award in 2013. In recent years, Lipski has focused his efforts on creating large-scale works for public spaces. Lipski lives and works in New York City.