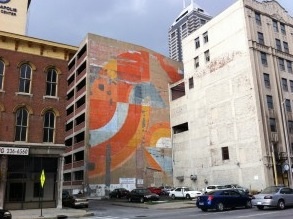 Untitled (Urban Wall) is an outdoor mural by Austrian artist Roland Hobart located at 32 North Delaware Street in downtown Indianapolis, Indiana. The mural originally occupied two exterior walls of two four-story commercial buildings at this site. The mural was commissioned by the City of Indianapolis for the Indianapolis Urban Walls Project in 1973. Fabrication of the mural began in September of 1973 and finished by the end of the year.

After it was completed, Indianapolis Star art

Untitled (Urban Wall) is an outdoor mural by Austrian artist Roland Hobart located at 32 North Delaware Street in downtown Indianapolis, Indiana. The mural originally occupied two exterior walls of two four-story commercial buildings at this site. The mural was commissioned by the City of Indianapolis for the Indianapolis Urban Walls Project in 1973. Fabrication of the mural began in September of 1973 and finished by the end of the year.

After it was completed, Indianapolis Star art critic Marion Simon Garmel described Untitled (Urban Wall) as “a complex puzzle of rectangles, pie-shaped wedges, quarter arcs and S curves in bold but earthy colors.” Urban Wall in the title refers to the Indianapolis Urban Walls Project, a region-wide call to artists by the Indianapolis Department of Parks and Recreation to develop outdoor mural designs meant to beautify downtown Indianapolis in hopes of drawing interest back downtown during the 1970s era of suburban flight.

Hobart’s graphic mural is composed of bold geometric shapes of bright colors; mostly reds, yellows, and oranges with pops of blue, black, and white intermixed. Curved rectangular forms morph together to create color-blocked waves that cross the wall. Each larger curved shape is made from smaller rectangles, triangles and trapezoids.

The City of Indianapolis and American Fletcher National Bank sponsored the development of Untitled (Urban Wall). The National Endowment for the Arts matched a $3,500 contribution from the American Fletcher National Bank, providing $7,000 to fund the installation of the winning mural. Deputy Mayor Michael DeFabis named Hobart’s mural the winner over four other finalists. Hobart received $700 for his winning design. His piece was the first of what was expected to be multiyear “Urban Walls Project” with many future installations. During the fabrication of Untitled (Urban Wall), which was completed by Naegele Outdoor Advertising under Hobart’s supervision, Indianapolis was home to multiple other exterior murals, but Untitled (Urban Wall) was the first to be sponsored by the city. The Urban Walls Project sourced painting services from the city’s unemployed and youth.

At the time of the mural’s installation, Steven R. Skirvin and Thomas A. Moyahan owned the two buildings on which the mural was placed. Skirvin owned the Indiana Parking Company garage, which sits at 145. E. Market Street. and Moynahan the Union Title Building, which sits at 155 E. Market Street. Both company owners agreed to fund the preparation of the area for the mural, and to pay for any future maintenance.

Roland Hobart was a native of Innsbruck, Austria, and studied at an Austrian art school for three years, specializing in stained glass window design and mural painting. He moved to Vienna and enrolled in the Akademie der bildenden Künste Wien. While there, he attended a six-year training program while simultaneously owning and running a printmaking business. Hobart moved to Shelbyville, Indiana, in 1966, sponsored by the Fleming family.  His work in Shelbyville included designing the Shelby County flag (1972) and a sculpture for the 1971 Shelbyville High School prom.  Hobart also created the logo for the Indiana General Assembly in the 1970s, a design that is still in use today.

While working as a graphic artist for L.S. Ayres, in 1971 Hobart created five original prints for the celebration of the Indianapolis Sesquicentennial. Each of the five prints represent an important aspect of the city. At the same time, he also produced an original work for the International Conference on Cities which took place in Indianapolis that year. The prints for both the sesquicentennial and the conference on cities consist of the bold, geometric style seen in Urban Wall. In the summer of 1973, Hobart’s silk screen prints were displayed at the L. S. Ayres & Company Auditorium in downtown Indianapolis as part of a two-artist show. Based on this work, he was encouraged to enter the Urban Walls competition.

Although Hobart’s primary career was working for Dynamesh, a company that supplied screenprinting supplies and equipment, from 1976 to 1977 he taught at the Herron School for Art and Design as an adjunct professor.  He also dedicated time to working with young people in the community on mural projects, particularly disadvantaged youth. In the 1980s he moved to Bloomington, IN.  As of 2015 Hobart had retired from Dynamesh and was living in a Bloomington assisted living center.

More information about the artist can be found at https://en.wikipedia.org/wiki/Roland_Hobart

The mural has never been repainted since its creation in 1973.  The north section suffered severe water damage in the early 1980s and was repainted a solid white, paint which is also deteriorating.  Concrete patches and areas of white overpaint mar the lower areas of the remaining west section.

Recently the mural has been gaining attention from Indianapolis residents and interest has been sparked in having the work restored.  This effort has a presence at https://www.facebook.com/restoretheurbanwall/

More information about the mural can be found at https://en.wikipedia.org/wiki/Untitled_(Urban_Wall)