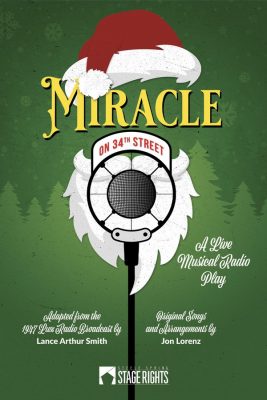 Buck Creek Players will hold open auditions for their streaming production of MIRACLE ON 34TH STREET: A LIVE MUSICAL RADIO PLAY, a Christmas musical radio play adapted from the 1947 Lux Radio Broadcast by Lance Arthur Smith with original songs and arrangements by Jon Lorenz, on Sunday and Monday, October 18 and 19, 2020, at the playhouse, 11150 Southeastern Avenue. Auditions will be conducted in a safe and socially distanced manner, with scheduled audition times between 6:00 PM and 8:30 PM.  Please visit their website to sign-up for an audition time and review the audition information.  Director Cathy Cutshall and Vocal Director Jill Stewart are looking for a diverse group of 2 women, 4 men, and 1 female child.  All roles are available.

When a department store Santa claims he’s the real Kris Krinkle, his case gets taken all the way to the Supreme Court and a little girl’s belief makes the difference in the “miracle”.  With live Foley effects and a score of holiday carols, MIRACLE ON 34TH STREET is a beloved musical that will melt even the most cynical of hearts.