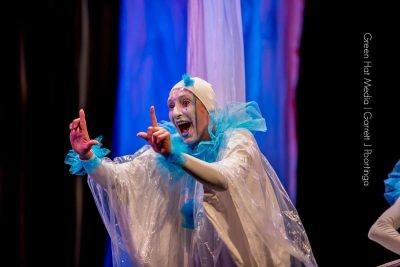 INDIANA UNIVERSITY – Department of French and Italian   May 1999

Earned a Bachelor of Arts in Italian Language

INDIANA UNIVERSITY – Department of French and Italian   May 1999

Earned a Bachelor of Arts in Italian Language

Summary of Skills and Qualifications

Cross-disciplinary training with strong holistic pedagogical approach to teaching at professional and college level. Well trained in psychophysical methodologies from around the world. Extensive professional experience as a teacher, performer and artistic director in several countries. Strong background in music, theatre, contemporary dance, Italian literature, Commedia dell’Arte, film studies and videography, with training in mask and clown techniques, mosaic and yoga. Large understanding in means of promoting culture and working with diversity with lifelong experience teaching children and adults. Creative, detail-oriented and flexible. Committed collaborator capable of multi-tasking in a team environment. Reliable, able to perform tasks independently and maintain a high level of productivity on a time-sensitive schedule.

Teaching and Teaching Arts (see under: Other experience in interactive artistic and educational activities)

Experience with Children: my own children, Music Together, public and private schools, as well as daycare institutions

Performing: (see under: Performances and concerts)

Outreach: member of the Executive Committee for the Brazilian Association at IU – BAIU – -1994 – 2009

Purchases instructional materials and serves as an account and office manager. Prepares informational materials for publicity or distribution to class members and to promote institution programs. Speaks before schools and community groups and coordinates promotional and educational events. Reviews and evaluates facility activities, interviews, hires and trains new teachers.

Meet the Instruments and pre-school programs at the Wonderlab – Bloomington, IN

Developed and introduced a bilingual music and movement program at the school. Trained classroom teachers. Helped organizing a music performance for the end of the semester. Thought classes and performed classroom teaching duties for children age 3-8.

Developed and introduced a bilingual music and movement program at the school. Trained classroom teachers. Helped organizing a music performance for the end of the semester. Thought classes and performed classroom teaching duties for children age 1,5 – 3.

Directed the children’s musical program for children age 8 – 12 at the Maple Bear Canadian School of Brasilia. Developed curriculum integrated program based on a story of Maurice Sendak “Where the Wild Things Are”. Worked In conjunction with teachers and volunteer parents to coordinate students work and create the “Wild Things” musical. The students were divided in areas of their interest and participated actively of the process writing the script, creating the scenery, lights, costumes, make up, dancing and acting, playing instruments, creating the music, making posters to advertise and creating a design for the represent of the show. Students were also responsible for doing interviews, documentation and press release for the musical. Created a musical community inside the school involving school staff, teachers, parents and students.

Developed and introduced a bilingual music and movement program at the school. Trained classroom teachers. Helped organizing a music performance for the end of the semester. Thought classes and performed classroom teaching duties for preschool, K- 4th grade

Assisted a third grade teacher in a classroom. Responsible for grading and helping students with their assignments and projects. Worked with small group of special need children (more than 10 % of them are identified as such) to enhance their skills in spelling, math and language as well with their ability of inclusion in the classroom.

Translated documents, instruction manuals, texts and audiotapes from English to Italian. Worked as an interpreter for Italian and Portuguese in congresses and conferences

2016 – Teatro Vida – Directed the musical “Os Saltimbancos” for the Portuguese department at IU.

2008 – co-directed a presentation for the Learning Festival at University Elementary School on the Brazilian “Caipira” dance.

2008 – Working with babies in a mixed age class, Chicago, IL

2005 – Introducing Music Together: How Children Grow Musically and How You Can Help, Princeton, NJ

Certificate of Appreciation in promoting international awareness via interactive video technology On behalf of Indiana University, 2000-2001

I have been working with theater, music, performance, dance, and multi-media for nearly thirty years. By training I am a musician, with strong working experience in theater production. I hold a MA degree in Italian literature, with concentration on film. All my education and working experience has been interdisciplinary. I am a good team-worker and believe in the power and importance of collaborations. I have collaborated with artists and academics, both local and international in several levels. I am an American citizen and I have performed and lived for extended periods in Brazil, Italy and Costa Rica. My pedagogical approach has been always to use multi-faced and inclusive interdisciplinary materials. As a teacher my experience encompasses a wide range that goes from babies to college level adults.

Certificate of Appreciation in promoting international awareness via interactive video technology On behalf of Indiana University, 2000-2001